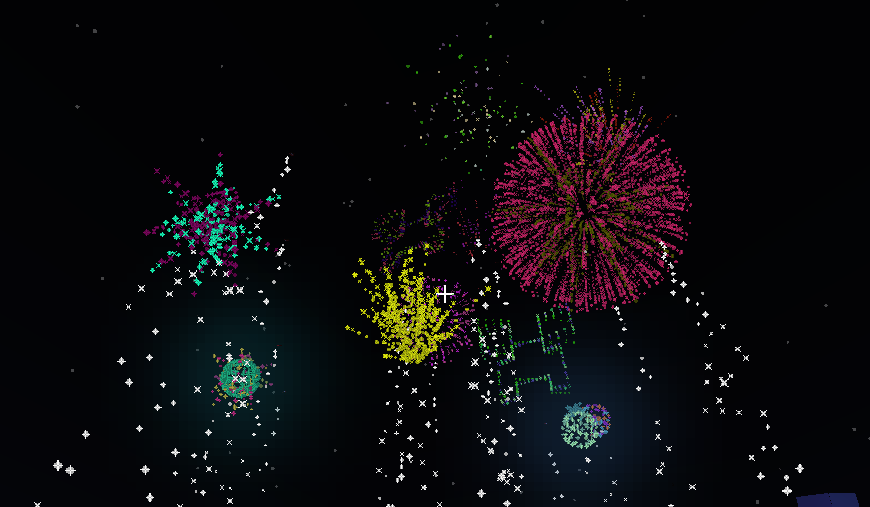 I played a bit of vanilla minecraft in survival with a friend and crafted a bunch of fireworks rockets. They are quite expensive, so I cheated in some resources. I wasn't satisfied with the selection and the effort it takes to create a lot of rockets with different colors and shapes by hand. I decided to cheat some in.

I searched online if there's a way to generate random rockets and came across a generator. You have to select a bunch of options and click "generate" to get a string. But I wanted about 100 different rockets.

So I looked into the output, the generator gave me

I quickly decided I am going to write a little ruby script to generate random rockets, because I have a lot of experience in ruby and I can do it with a very little overhead.

to get a random range between 1 and 3.

I wrote this code to generate the explosion string:

A rocket can have multiple explosions and they need to be in square brackets. So I added a method to call gen_explosion 1 to 5 times

I also needed to generate the color. Looking at the string, I figured that the color is a decimal representation of RGB, so we have 255 * 255 * 255 colors that will work. I ended up making a method that generates n colors (similar to what the methods above do, combined it in one) method:

This could be a lot fancier. For example I could want to avoid having dark colors. I was okay with random values for now though and I wanted to get it working.

At first in the development process, I messed up having forgotten the square brackets in gen_explosions. After debugging it by comparing it to a good string, I found another issue: When I pasted the output into the chat line in the game, it would cut off the string if it was longer than 255 characters and fail to generate the rocket. I reduced the amount of explosions a rocket has to 3, as well as limit the colors to 3 and one color for the fade effect. It sometimes still generated strings that were too long.

As a quick workaround I am not particularily proud of; I ended up generating the strings so often until I have a string that is lower or equal 255 characters in size.

I was dissatisfied with it and I decided to count the characters. I split a few things into parts and copied it into irb (the interactive ruby shell):

So the base command takes 61 characters of space already. I then noticed that there's room for optimization in the gen_explosion method: I can omit values of Flicker and Trail if the random value is 0. So I ended up changing gen_explosion to

Back to counting. I limited the color generation to 3 colors. The maximum size it can be can be quickly determined using irb:

And the string per explosion minus the colors:

I changed the code in gen_explosions to check for if it can fit the remaining length:

But what if the gen_explosion it generates in this iteration can actually fit in the string? I made it to generate the explsion string first, then compared it if it fits within the boundaries of 255 - 63 - 1 (adding a comma)

Copying it to clipboard

I could have stopped there, but I wanted to not press "t", my paste key combinaton and enter every time. I installed autokey and looked into its documentation. First, i changed my script to output the give command instead of copying it to my clipboard (and removed the endless loop):

In autohotkey I wrote a script that activates on a keypress. I bound it to "z".

I couldn't get it it working at first but then I looked up the documentatoin and figured that I needed to add getOutput=True to the system call. I had (and still have) some timing issues. Adding 0.2s delays between they key presses seem to fix most of the issues.

It has been a fun little project! If you liked liked this little adventure and you're able to, you can sponsor me on github or buy me a coffee.

I pushed the source code to my repository on github: https://github.com/jglauche/mc_fireworks